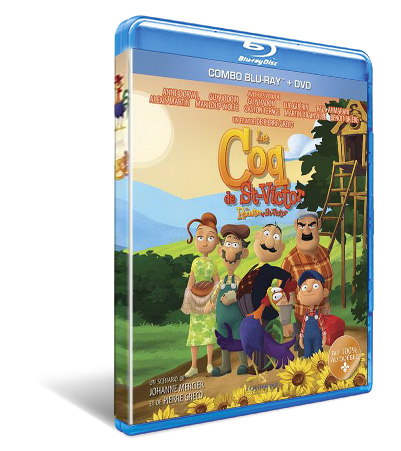 10th Ave Productions, Equinox Films and VVS are pleased to announce that while still in the lead as one of the top Quebecois films of 2014, the animated family film, The Rooster of St-Victor, will be available on DVD as of June 3. The film is offered in the original French version (Le Coq de St-Victor) as well as the English version on DVD or combo Blu-ray / DVD, which can be purchased at Costco, Walmart, Archambault, HMV, and Superclub Videotron, among others. It is also available for viewing on pay-per-view or on-demand TV from the following cable TV providers: Bell Fibe, Videotron, Cogeco, Rogers, Shaw, Telus, Eastlink, Sasktel and MTS.

The Rooster of St-Victor synopsis:

The mayor of St-Victor is proud of his village’s thriving economy and orderliness. He credits the prosperity and success of St-Victor to one individual: his beloved pet, an unusually loud and punctual rooster who wakes all the villagers at precisely 4 o’clock in the morning – every day of the week, whether it’s a work day, the weekend, or a holiday. Some of the villagers, having had quite enough of the rooster’s relentless early morning crowing, put a price on his head but the rooster got sick and he had to get his pet to the best vet in Atlanta. They succeed in ousting the pesky rooster, but the village immediately suffers negative consequences. Alarmed at the village’s sudden social and economic downturn, a few citizens form a special squad to retrieve the bird. The Rooster of St-Victor is a highly entertaining homage to perseverance and punctuality filled with comedy and laughter!

VVS Films distributes the DVD and the VSD The Rooster of St-Victor in Canada.