The Emerging Talent Award went to Mike Geiger, who has worked in broadcast animation for over 10 years, in roles ranging from animator to director, and is currently a creative consultant on his series Winston Steinburger and Sir Dudley Ding Dong, set to air on Teletoon and ABC Australia.

The Outstanding Achievement Award, meanwhile, was handed to Andra Sheffer, CEO of two private funds supporting Canada’s digital media, television and film industries (Independent Production Fund, COGECO Program Development Fund). To honor Sheffer’s contribution to the industry, a bursary has been created in her name. Starting in 2016, and for 18 years, an amount of CDN$1,500 will be awarded to support a student in the youth media field. Hosted by Second City Toronto alum and actor/ improviser/writer Ashley Comeau, the awards gala included a special surprise tribute for longtime TVO children’s programming exec Pat Ellingson, who will be retiring in August.

Here is the full list of last night’s winners: 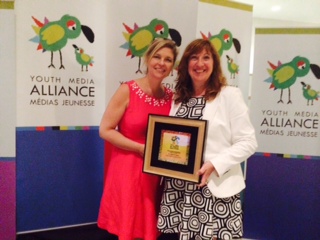