Felix and the Treasure of Morgäa selected by SODEC 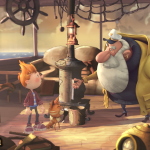 St-Augustin-de-Desmaures, Wednesday, December 20th, 2017 – 10th Ave Productions is proud to announce that its animated feature film Felix and the Treasure of Morgäa has been selected from among nearly 80 projects submitted to the production assistance program of Quebec’s cultural funding body, the Société de développement des entreprises culturelles (SODEC).

Felix and the Treasure of Morgäa is a CGI-animated feature project with a screenplay by young-audience writer Marc Robitaille (Un été sans point ni coup sûr and Noémie, le secret), animation director Nicola Lemay (Noël Noël and Private Eyes) and producer Nancy Florence Savard (The Legend of Sarila, The Rooster of St-Victor and Nelly and Simon: Mission Yeti). This green light from SODEC officially launches the financing round, which will take place over the coming months.

Felix and the Treasure of Morgäa was singled out at Cartoon Connection 2016 to receive a Cartoon Award, which is presented to top animated feature projects. The project has already attracted international interest thanks to its presentation at Cartoon Movie last March in Bordeaux, France.

Convinced that his father, who went missing at sea two years ago, is still alive, 12-year-old Felix sets off with Tom, a retired sailor as well as Ulysse the cat with dog’s features and Quack, the one-legged parrot. Their quest leads them to the Island of Eternal Night, where they find an underground city, home to members of a secret society ruled over by Morgäa, a megalomaniac with a priceless treasure: the secret to immortality.

Based in St-Augustin-de-Desmaures, Quebec, 10th Ave Productions is a leader in Canadian animated feature production. Its third animated feature, Nelly and Simon: Mission Yeti, has already been selected for several international festivals and will open in Quebec on February 23rd, 2018.