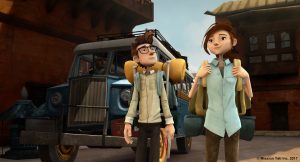 10th Ave Productions is proud to announce that its 100% Canadian animated feature Mission Kathmandu: The Adventures of Nelly & Simon, directed by Pierre Greco and Nancy Florence Savard, has been nominated for a Pulcinella Award in Italy, in the Best Animated Feature category. “What a wonderful gift to receive on International Women’s Day – learning that our film, produced and co-directed by a woman, has been invited to its 21st festival since being released in Quebec in February of 2018,” notes Nancy Florence Savard, President of 10th Ave, with a smile in her voice. Mission Kathmandu: The Adventures of Nelly & Simon will be presented at the 23rd edition of the Cartoons on the Bay Festival in Turin this coming April.

Following its recent release in the USA under the title The Yeti Adventures, the worldwide progress of Mission Kathmandu: The Adventures of Nelly & Simon continues. Sixty countries have acquired distribution rights. “Yesterday, I was at Cartoon Movie in Bordeaux, where our French distributor, Eurozoom, informed us that the film will get a theatrical release in France next winter” the President and producer adds.

With a screenplay by Pierre Greco and André Morency, the story begins in 1956 in Quebec City, where Nelly Malloy, a youthful private detective, and Simon Picard, a scientific research assistant, meet by chance. Bankrolled by an ambitious client, the impulsive and headstrong Maloye joins the methodical and pragmatic Picard in a dubious quest to prove the existence of the elusive Yeti. For guidance, Simon carries with him an explorer’s journal that supposedly contains the location of the mythical creature’s den. Along with Tensing, their young Sherpa guide, and Jasmin, a chatty myna bird, the brave-hearted heroes come face-to-face with countless dangers during their trek through the heart of the Himalayas.

Mission Kathmandu: The Adventures of Nelly & Simon is the third animated feature produced by this Quebec company headquartered in Saint-Augustin-de-Desmaures. Besides its five features now in development, 10th Ave will be starting animation on its next animated film, Felix and the Treasure of Morgäa, in the next few days. Among the company’s other hit films are The Legend of Sarila, the first 100% Canadian stereoscopic 3D animated feature, also directed by a woman; and The Rooster of St-Victor, Canada’s first computer-assisted French-language animated feature.