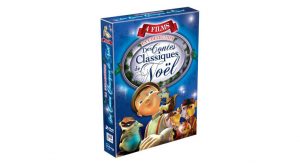 10th Ave Productions celebrates the 10th anniversary of its first animation short film, The Legend of the Christmas Tree, and in doing so, underlines the start of a new decade of production with the completion of its first feature-length animation movie: The Legend of Sarila.

“This week, we celebrate the 10th anniversary of our very first animation production: The Legend of the Christmas Tree, the first ever Quebec-made 3d animation film, financed by the Canadian Television Fund in 2002,” Nancy Florence Savard, producer/director and president of 10th Ave, declares with pride, “And in keeping with tradition, this film, as well as the three other Christmas tales produced by 10th Ave, will be aired, as a part of holiday programing on Télé-Québec. By the same token, the DVD box set of our Christmas tale collection continues to occupy a prominent position on the shelves of many retailers.”

Since its founding in the fall of 1998, this modest little film and TV production company has managed to develop a substantial collection of intellectual property, now enjoyed around the world. A steady production of animation has made it possible for 10th Ave to develop an expertise in Quebec, to create opportunities for local talent to shine beyond provincial borders, and to build a solid and sustainable business. “It means that, as well as being able to share our stories, our characters, and our landscapes with the world, through the use of multiple platforms, the economic returns resulting from marketing and exporting our works abroad, come back to benefit our local creators and Canadian investors,” emphasizes the 10th Ave director and producer.

For 14 years, 10th Ave has invested considerable effort into the development of film and TV animation production, through the implementation of a long-term development plan. 10th Ave has always had faith in this sector for various reasons, including, first and foremost, the existence of such significant local talent in the fields of scriptwriting, illustration and technology, and it’s thanks, in part, to the easily exportable animation productions of 10th Ave that this region’s talent is gaining international recognition.
In addition, this sector is responsible for the creation of well-paying jobs, based on annual mandates rather than short-term contracts. With feature-length productions that require an animation period varying between 13 and 23 months, compared to 25 to 40 days of shooting for a live-action feature-length film, this economic sector of Quebec’s cultural industry deserves our attention.

“I am happy to report that there has been a noticeable surge in activity in this sector. With the arrival of Canadian co-productions like Max Film’s The Day of the Crows, Corporation Images Entertainment’s Walter and Tandoori’s Christmas, Caramel Film’s The Suicide Shop, as well as The Legend of Sarila, a 10th Ave and CarpeDiem Film & TV co-production, and The Rooster of St-Victor, which we began work on in the fall, you can feel an effervescence and emergence of a new cinematic sector here in Quebec. Of course, it will require a bit of trial and error to develop our clientele and win over the public, at home and abroad.”

It was with that goal in mind that, The Legend of Sarila, the first 100% Canadian, fully stereoscopic animation film and a 12 year-long labour of love, was presented in November at the American Film Market, by Edward Noeltner of Cinema Management Group (CMG); to date, it has been sold in approximately 20 countries. Distributed in Canada by Alliance, the release is planned for the 22nd of February in cinemas around Quebec.
In the meantime, during Cartoon Connection, an international event which will be held at the Quebec Hilton from the 10th to the 13th of December, 10th Ave will present a mini workshop on the making of The Legend of Sarila for 140 participants from Europe, Canada, and the Americas.

With the production of The Rooster of St-Victor, the first entirely Canadian-made animation movie with the original version in French, this little production company from St-Augustin-de-Desmaures, demonstrates its capacity for innovation, and affirms its role as a leader in the Canadian animation industry. 10th Ave Productions currently has six full-length animation features in development.

“It’s imperative that we forge ahead, bringing to fruition our numerous projects, if this industry is going to find its niche and we have every intention of making that happen. This week, we will take the opportunity to celebrate the 10th anniversary of our very first animation film and the imminent arrival of our first full-length animation feature,” the producer and director of The Legend of the Christmas Tree and The Legend of Sarila acknowledges joyfully, “It has been a 10 year voyage for 10th Ave Productions, from our first short animation to our first feature film⎼ a long-term plan, that has only just begun.”