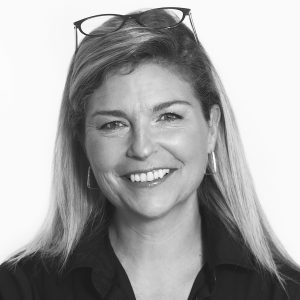 A native of Quebec City, with a bachelor’s degree from Laval University, Nancy Florence Savard began her television career in Montreal. After 10 years of working as a journalist, creator, director, production head and associate producer with various media groups in Montreal and Quebec City, Nancy Florence Savard created 10th Ave Productions in Saint-Augustin-de-Desmaures in 1998, founding her production company at the same time as she was founding her family of three children.

A pioneer in computer animation, Nancy co-produced and directed the first 100% Canadian animated feature, released in theatres in 2013: The Legend of Sarila. With this production, Nancy became the first Canadian to direct an 80-minute animated feature in stereoscopy – ie. in 3D. In 2014, after winning numerous awards at the Toronto International Film Festival, her work as a director was recognized with a Birks Diamond Tribute, awarded to women of the year in cinema.

That same year, Nancy produced the first 100% Quebec-made French-language animated feature, The Rooster of Saint-Victor, which was picked up by a major US studio for distribution in 98 countries. During the 2018 spring break, 10th Ave Productions premiered its third 100% Canadian animated feature, co-directed and produced by Nancy: Mission Kathmandu.

Nancy Florence Savard is involved in her community, serving as board chair of the Quebec City Film and Television Industry Coordination Committee. She also sits on the boards of the Quebec Media Production Association and the Museum of Civilization, and she’s a member of the Digital Arts and Interactive Entertainment Working Group at Quebec City International.

In 2019, she is named Movie Producer of the Year by the Quebec Media Production Association.